Jim Boeheim and the throwaway nosepick 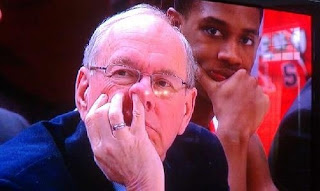 Earlier this year, Jim Boeheim was caught picking his nose during the Big East Tournament. I have to say I am disappointed to see such poor form out of Coach. This is the kind of lazy nosepick that gets you eliminated from the tournament early, as his teams are prone to do. The pinky is not the most effective tool to use and he just nonchalantly picks his nose without any regard to form or effectiveness. No passion. No heart. No hustle. He's 67 and maybe the years are starting to wear on him, because his teams and his nosepicks just aren't cutting it anymore. He may be talented, but without hard work his nosepicks will always be second rate. Set an example for your team, Coach! I want to see the determination that wins national champions! Because when you slack on your nosepicks, your teams slack in response. Show some respect.