Working on Sunday: Mother's Day and my birthday left little time to post these pictures sent in by Atticus Tamman. It was a wild day in the premiere league with Man City winning it due to some late game heroics. From the last day of the Premiere League season we have two nosepicks: Vincent Kompany of Manchester City and Wayne Rooney of Manchester United. Manchester City just edged out Manchester United for the title and I think these pictures explain it all. Both involve players using the clamp technique on the left nostril. Very similar execution but the face tells the story. Rooney looks like he is simply accepting the results as is. He is content just picking his nose at the end of the match. Once a man inspired by his baldness, the hairplugs have pacified the man. Kompany on the other hand had a determined look on his face. He still has the EPL to champion and the nosepick is simply a stepping stone to the ultimate goal. Picking his nose with a chip on his shoulder. This is what champions are made of. 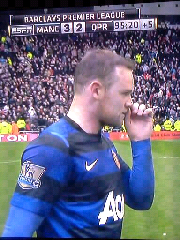 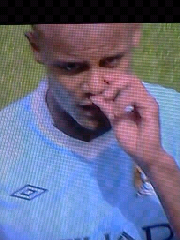