The 7th best player picks his nose on opening day 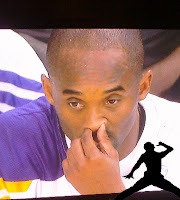 Hello you gorgeous people, it has been a while, did you get your hair cut? You look fantastic. I have a couple of  belated Christmas gifts courtesy of Kobe and temporary access to a DVR. While a previous Kobe feature was a blurry bigfoot with a dubious nosepick, we have absolute concrete proof that Kobe does, in fact, pick his nose. This double-layered nosepick during the Lakers' opening day loss to the Bulls had me more excited on Christmas than any gift I received. (I had a lovely Christmas thank you for asking) 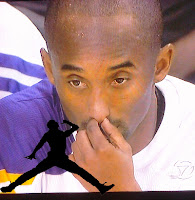 Kobe started the nosepick with two fingers flaring the nostrils out and he followed it up with a clamp to really drive the point home. Truly flawless technique from the man who no doubt spends hours a day practicing the best nosepick, perfectionist as he is. If I had to sacrifice 16 games to the NBA's overlord David Stern for this gem of a nosepick, I'll volunteer them every year. I was afraid that the lockout would allow NBA players to focus on their outward appearance while on the bench and avoid picking their noses. We were instead blessed with Kobe's supernatural foresight in knowing that a shortened season would mean less time for nosepicking. He simply doesn't have time to look for a tissue, damnit. Here's to hoping this is a trend throughout the season. I'm looking at you Vince Carter.
Posted by Ely at 5:37 AM No comments: