Tony Plush shows his sophisticated side 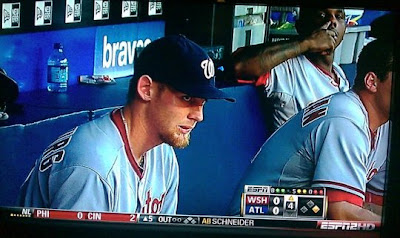 Noted crazyman genius Nyjer Morgan here hamming it up for the camera for the benefit of us all. Stephen Strasberg however was clearly not amused by his antics. Little did Strasberg know at the time that a year later he would be recovering from Tommy John Surgery while Morgan aka the smooth, sophisticated Tony Plush is now playing for a playoff contender. I hate to beat a dead horse, but athletes who pick their noses are in turn rewarded. It's just how the world works. Morgan shows some nice Plushdamentals in this pick, going with the classic pointer finger, and making sure that everyone sees it. I believe that this is the first nosepick where the athlete is actively picking it with the intention of getting it put on tv, and that is why I love Nyjer Morgan.