Brennan Boesch with an alternative pick 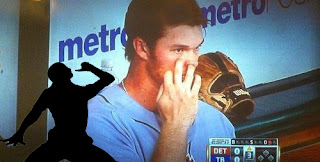 Alright folks, I apologize for the lack of content lately. Graduating college/copious amounts of alcohol/lack of a DVR have been interfering with my ability to get the nosepicks. Luckily I have something for you today. Here's second year player Brennan Boesch getting a little creative with a ring finger pick. Obviously a young kid who doesn't have time to worry about the proper way to pick a nose, Brennan just goes with whatever works at the time. With that said though, he's a lefty and he was even smart enough not to get anything on his throwing arm. After a respectable rookie season, Brennan is looking at a long career of baseball and nosepicking.

Remember to follow at twitter.com/THE_REAL_APTN for the latest and greatest in nosepick related tweets
Posted by Ely at 7:33 PM