Hundreds of collegiate athletes are about to be featured all over television and online for the next month, and you know what that means: There will be plenty of nosepicks. I look forward to bringing you the best Nosepicking March Madness coverage that you can't see anywhere else. As a nice appetizer, we have Jack Cooley of Notre Dame clearing out the nostrils during a free throw attempt. Congratulations Jack! You're the first pick of the Tournament season! Try to keep your ego in check though. I understand the fame that comes with being featured on this site, but you gotta stay humble as Notre Dame looks to make a run during the tournament. It may feel like it, but being featured here is not the National Championship. Try to keep that in mind. 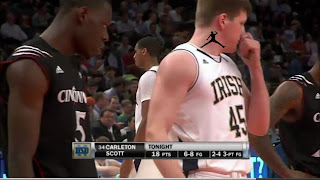 So stay tuned during the Tournament for all the best nosepick analysis and follow us at twitter.com/THE_REAL_APTN for 140 characters of shameless pandering to athletes and of course you the fans.
Posted by Ely at 1:33 PM