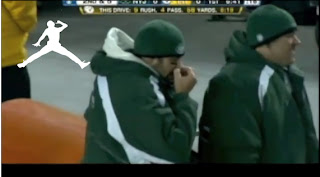 Hello to all the lovely ladies and fellas out there.We have here Mark Sanchez, Quarterback of the Jets, sharing a nice moment with an elder teammate. A Double-sided pick followed up by wiping it all over Mark Brunell's jacket during the AFC Championship game tonight.
When Sanchize was coming out of college early, there was some talk that he wasn't quite mature enough for the NFL and could do with some more learning. It's nice to know these people were so obviously wrong. It takes a real leader with an immense amount of gravitas to just wipe your nose remnants on the veteran quarterback relegated to the sidelines. Take those reins, young man. With that being said, there isn't much I can add to this nose pick and wipe. It really is a thing of beauty to see on the football field, the opportunities of which I normally only dream. Enjoy the video below: