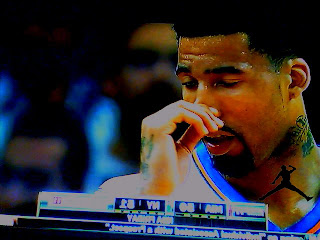 Miami Heat vs. New York Knicks. Stop 2 after Boston on the "Bud Light Here We Go Everyone is a rival with the Knicks again tour" sponsored by ESPN. This game was actually a decent one. Not in terms of the play, the Heat demolished the Knicks, but in the important area: nose-picking. A nice tight close up of Wilson Chandler picking his nose with the proper goofy facial expression during it was a solid start to the other nosepicks captured. Before I go on I should apologize for the low quality, I had to get a new laptop after mine got stolen so the webcam isn't as good, but I still aim to get you the best possible picks. 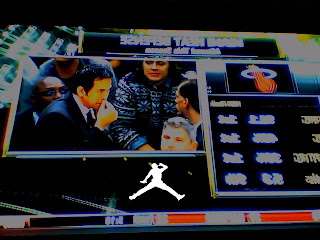 Following Chandler we get Assistant Coach Erik Spoelstra doing pretty much what he does during games. To be honest he wasn't even very effective at picking, he didn't seem to cover much surface area in the nose so I question really how committed he was. For someone whose career is hanging in balance, it would be nice to see a little more effort. 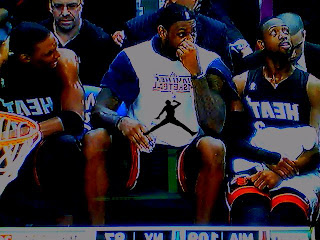 Now to the main event, the reason why people show up to the Heat games (well I mean by halftime). Player/Head Coach LeBron James picking his nose. Clearly not as good as the once in a lifetime nosepick that told me he was leaving Cleveland, but here he's with people he wants to be with, so nosepicking is not at the top of his list. The talking and nosepick multitasking seen here is a talent nonetheless. LeBron knows no one is going to call him out on the team so of course he does whatever he wants. Which, based off of his precedence, is to pick his nose at basketball games. 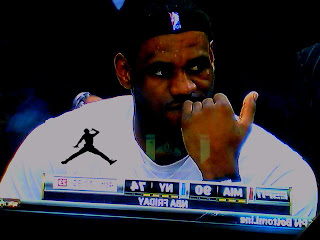 It's not all praise on the King though. Come on LeBron, chewing your nails is a filthy habit and you did it all game. Let's be a little more hygienic please.
Posted by Ely at 2:45 PM