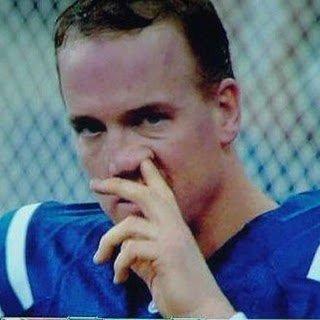 It's football season everyone! Is anyone else as excited as I am for physically debilitating injuries, concussions, steroid-fueled rage, and of course Jesus? While the NFL likes to keep their possessions under a dehumanizing helmet so people won't begin to get the idea of having sympathy for the players, we here at APTN like our athletes with their faces out in the open and their fingers in their noses.

To the left we see Peyton Manning going with the pointer finger pick and looking straight into the camera. It's almost a challenge to the viewer to try to judge him. Millions of dollars in salary and endorsements means this man is practically untouchable. The only way he could lose those endorsements would be if he was either a closet sex fiend, a murderer, or running an illegal dog-fighting ring, but really the losing of endorsements would be conditional on him becoming black first.
So go ahead, judge him for this nose pick, he doesn't care. He feeds off of it. The judgments only strengthen him. Do you feel it? Do you feel his gaze penetrating your very soul? Making you look inward, because you know you are a nose-picker yourself as well as reminding you of that one time you stole some candy from Walgreens, even though it was only once and you always told yourself that you would give the money back to them eventually but you never actually did, so the guilt rises up and starts eating away at your very being? Do you feel all of this, all while he's picking his nose? Do not mess with Peyton Manning. I have to go call my therapist.
Posted by Ely at 11:20 PM 110 comments:

I'm still trying to work the kinks out with ESPN3 so the quality isn't so shitty, but I feel like it's been too long without any pictures, so I'm gonna treat you to a few I've found around the internet over the next few days. We'll start with Greg McElroy in the National Championship game. Locked in and determined, despite having a helmet on and it being the 4th quarter of the national championship. This is the kind of focus that is expected out of a Nick Saban player, even if the focus is devoted to something other than the game at hand. Greg McElroy had the presence of mind to use his non-throwing hand which really isn't something you can teach, that's just instinct. He's a natural public nose-picker if I've ever seen one. 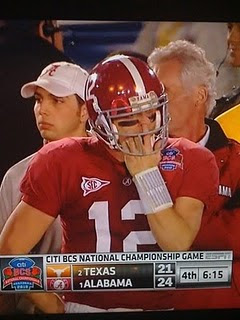 ESPN3 is offered on campus for free, so I can finally return to giving you guys what you want, Athletes picking their noses in various ways and places. I'll try to get one up tomorrow to give you a taste of what's to come. Stay vigilant, the time when steady updates return is nigh.

In the mean time, stay connected with Athletes Picking Their Noses at twitter.com/THE_REAL_APTN and spread the word.
Posted by Ely at 1:48 AM No comments: