The horror of a tissue in hand

During this World Cup we really have seen some incredible stuff on the nose-picking front but never have I seen someone respond to what was going on with the rampant nose-picking. I suppose though, there is a first for everything. 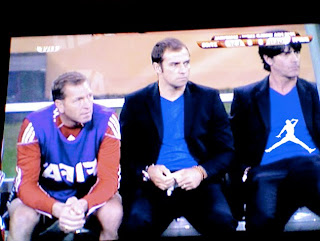 Here we see the German coaching staff, and as we know the German Manager is fully capable of picking his nose, but is that what we are focusing on? Is that a tissue in the middle coaches hand? What is this madness? He's not going to actual blow his nose like a civilized human being? 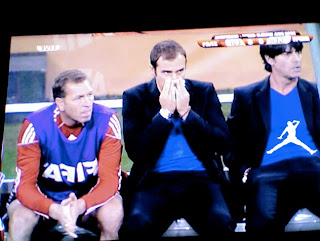 Oh God he did, it makes me sick to my stomach! This man must have seen me featuring Joachim Low and responded by choosing not to pick his nose. He blew it exactly when the camera went to him which makes me feel like this was staged. I'm not a fan of conspiracy theories as you loyal readers know, but this is absurd. Having the tissue ready in his hand and right when the camera pans to him, he blows his nose seems like a strange series of events. Not pick, but blow! Oh what is going on in this world that athletes and coaches must make a point to NOT pick their noses and simply blow their noses into tissues? If this catches on I'll be out of business, I can't stand for this. Athletes: Continue picking your nose, do not follow this man. Clearly there is something to picking noses as the Netherlands went on to the final and Germany didn't. You may tell me I don't understand the basic concepts of causation and correlation, but I'll tell you that, whatever, I don't need school.
Posted by Ely at 8:58 PM