Exclusive Pick of the Night: Pau Gasol goes with a classic 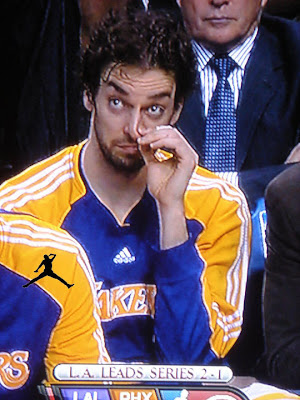 The first exclusive on this site, fresh from the loss to the Suns tonight. Pau, during the tiring 6 for 14 game he had, is braving the conditions of whatever is sitting on his face. Pau really shows the grace not seen in other big men in this pick. He of course goes for the classic clamp which seems to be athletes' go to pick. I think this lies in its easy escape in case someone see them, but more importantly because it can sometimes pass as a simple nose scratch, wherein the inside finger is only offering stability to the scratch, nothing more. With that said, however, this was clearly a man with something in his nose he wanted to get out. From what I could tell, I think it was Sasha Vujacic, although there are no confirmed reports on that yet.

Credit to the ever vigilant nose-pick aficionado Ellie Bloom for the picture
Posted by Ely at 1:27 AM