Obama. The athlete, the nose-picker. 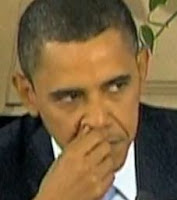 I know what many of you will say: "Barack Obama is the President, not an athlete." My response to that is, with the hoops he's been jumping through to get health care reform passed, he's practically a gymnast! You see people, that's what's called being topical. Besides, we all know he's big on basketball and look at this bod!

That is an athlete.
I don't think this nose-picking picture gives justice to how suave Obama pulled this off on live TV:
He did not miss a beat, such an organic process, so fluid. I stand in awe of your abilities, sir.
Posted by Ely at 1:31 PM